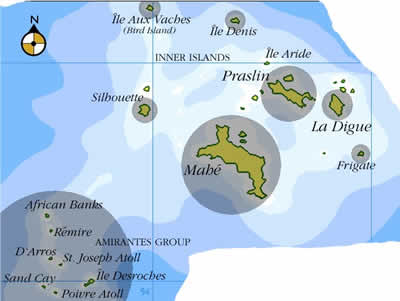 The Seychelles is home to two National Heritage sites, The Vallée de Mai and Aldabra.The largest island is Mahé, where about 90 percent of the population is based. It is 27 kilometres long and 8 kilometres wide and is the country's political and economic center. Mahé has many fine hotels and wonderful beaches together with an abundance of unspoilt rain forest.

Praslin-about 15 minutes by air from Mahé - is even more relaxed than Mahé and is becoming increasingly fashionable. Some of the world's richest marine life can be found in the warm waters around Seychelles. Over 950 different species of fish are estimated to be present in local water. Of particular interest is the whale shark, which is present in growing numbers.

In the past few years there has been a trend towards the development of otherwise deserted outer islands, with new hotels being constructed and others refurbished. Bird, Desroches, Denis and Frégate islands are all popular with those seeking a truly isolated yet upmarket location. It is hot and rainy from November to April and drier and cooler from May to October. The islands are situated completely outside the cyclone belt. The people of Seychelles are a mixture of African, Malagasy and French, which came to be known as Seychellois after slavery was abolished in 1835.The cuisine has been influenced by the islands' many different cultures. Creole cooking consists of varied seafood, coconuts and curries and more.

The Seychelles rupee is divided into cents and you can change your money at the airport on arrival. Banks are open from 08h30 - 14h00 on weekdays and upto 11h00 on Saturdays.

The official languages are English, French and Creole.
National Parks & Areas Of Interest