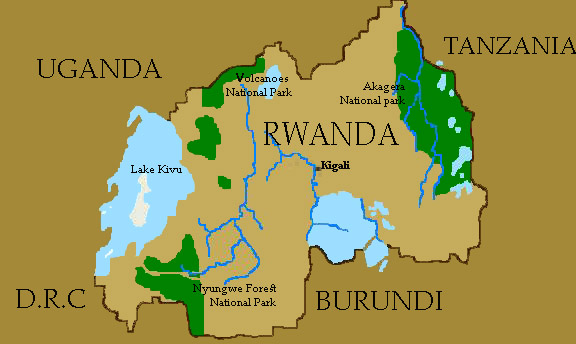 Rwanda is a landlocked republic in Equatorial Africa occupying 26,338km2. It is located on the eastern rim of the Albertine Rift, a western arm of the Great Rift Valley, and between rivers Nile and Congo, Africa's two largest river systems.  Much of the country is mountainous, the highest peak being Karisimbi in the volcanic Virunga chain protected by the Parc des Volcans. The country is dotted with lakes which have erratic shapes following the contours of the steep mountains that enclose them, the largest being Lake Kivu.

It is the most densely populated country in Africa. French, English and Kinyarwanda are the most widely spoken languages and the population of about 10 million people is largely Christian with some Muslim and Animist communities.

The country  has a number of unique delights to offer travellers. The most famous being Parc National des Volcans in the Virunga volcanoes for mountain gorillas to which Dian Fossey dedicated her life. Nyungwe Forest, one of the largest montane forests in Central Africa, is renowned for its large troops of colobus monkeys and rich variety of orchids. Akagera National Park is a savannah park with elephants, hippo and crocodile. Lake Kivu is a beautiful inland sea enclosed by steep terraced hillsides. There are a large variety of birds. Rwanda has a rich culture with its second city, Butare, having one of the finest cultural museums in Africa
Rwanda Accommodations
National Parks & Areas Of Interest