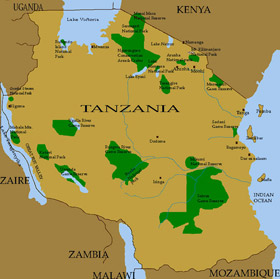 Tanzania is the United Republic of Tanganyika and Zanzibar. Dodoma, its political capital is in the center of the country and Dar es salaam, the economic capital, is on the coast. It occupies an area of 945,087 km2 out of which over 100,000 km2 are devoted to reserves and National Parks. The country has a vast central plateau sloping down towards the Indian Ocean, three great lakes (Lake Victoria, Lake Tanganyika and Lake Nyasa) and the Great Rift Valley with its twenty large volcanoes and hundreds of small cones. The coast is lined with a series of coral islands such as Zanzibar, Mafia and Pemba.

A wild, romantic undiscovered country, a land with wide open spaces and magnificent wildlife, warm hospitable people, explorers’ tales and sultans’ palaces, slave trade and spice island. A country where you can relive all the enchantment of an ageless continent while still enjoying all the comforts and luxuries of modern life.

Tanzania has one of the world’s finest wildlife sanctuaries and the most common ones are Serengeti, Ngorongoro, Tarangire, Lake Manyara, Mount Kilimanjaro, Selous, Mikumi, Ruaha. Other areas pristine areas include Gombe Stream, Mahale Mountains, Katavi, Udzungwa Mountains and Rubondo.

A Tanzanian safari can be as luxurious or as adventurous as you like, with a choice of accommodation from luxurious lodges to simple campsites, from safari in search of the wild to climbing Mt Kilimanjaro – the highest in Africa.
National Parks & Areas Of Interest